Finally! There it is.

This book of yours (proposal, manuscript, article, blog, pamphlet, web copy, zine, dead-sea-scroll, grad school essay, or whathaveyou), is it safe to say you’ve come to consider it a baby? And if so, has this baby been nursing with you now far longer than Parenting Magazine might reasonably recommend?
When we’re IN IT – as you are now, presumably – it is so very easy for our own eyes to miss those smallest of errors, the simple typos and nasty grammatical oversights that make us clench a fist and grit our teeth, cursing mildly when our sister points out that we’ve written “to” rather than “too” on page 24.

We are our own worst editors because our eyes know what our brain wanted to say. And that’s the valley where typos triumph. (Free Tip: Speak your writing out loud.)

BUT, the content is there. Your content IS THERE. And that’s terrific. You’ve done the work; you’ve done the hard work already. You already wrote the thing! You’re about to ship. And you need to ship.

Don’t trip on this late – but not insignificant – step toward that coveted finish. Don’t allow a few silly typos to cloud the impression your readers may take away from what you’ve already worked so hard to get right. So hard to say. Truth is though, they probably won’t notice. Frankly, most people don’t. And your message will STILL land. So, congratulations on shipping. Typos or not.

Some people have the opposite problem – letting the perfect become the enemy of the ever-done-at-all.
This is, of course, the point where resistance rears its head. And a project dies the quietest death.

But not you; you’re an author. You take your work seriously. AND please don’t let that small published typo ruin your day. Because though it is small – to you, in that future moment of first-noticing – it’s also not small. It stings; it will be annoying. In fact, it may very well even ruin your day still. If you allow it. (Because it’ll likely still be hot too, right off the press – the most perfectly opportune time to notice such things. Also why Gmail Labs added the unsend feature.)

​[An aside, if you’ll humor me: I’m quite certain this has something to do with how – for so long – we humans have just come to internalize the printed word as the final word, the final say. Because books were rare. Publishing was a daunting task.

And though publishing now is logistically very easy, writing still remains daunting on a whole different level.
It’s important to remember that any printed words and their accompanying typos could only ever have been strung together by any other human no more perfect than yourself. In fact, depending on how far back you want to go, I’d wager sometimes significantly less so.]

Anyway, before I wax too religious… what I’m trying to say here is, if you’re picking up what I’ve been putting down thus far, allow me to help. I’d like to help.

Let me tap you out of this dystopian-future-nightmare-WrestleMania™-of-words and step into the burning ring of fiery grammatical errors on your behalf.

Take a break. (“Run away with us for the summer.”)
I’ve been catching typos and those all-too-easy-to-miss grammatical errors for as long as I can remember – for the better part of two decades now – dog-earing corners of countless paperback pages as I circled yet another printed, stone-carved, forever-etched, permanently-published, (gasp) OFFICIAL mistake, since I was – what? – maybe 14? That’s over 20 years.

Some call it a CURSE; if I were one to call it anything, that word might be fun. (Yea, you know, like semicolons; fun.) My story is that I can’t read anything without finding even the smallest of errors. Once, in the grocery store, I picked up a cereal box and told Lianne, “I feel like I could find a typo somewhere on this box in the next 30 seconds.” And I did! There most certainly was a legitimate error. (I can only surmise that in the instantaneous moment it took me to postulate this wager, I had already subconsciously spotted said error and tallied my +1. But I actually don’t think it happened that way.)

Another time, while navigating the lovely night-markets under Taipei’s overpasses, my eye was quickly drawn toward a massive billboard spanning multiple floors of an office skyscraper across the street and its most-definitely-though-just-slightly-misspelled website URL. (Oh, backpacking Asia is a proofreader’s dream.)
At TOMS Shoes, I proposed a relatively minor – but not insignificant – update to our mission statement because I saw potential in the impact of one word. That first word, with. And now, these words continue to be printed in the soles of millions of pairs of TOMS – and under an equal number of small feet – around the world.

“With every pair you purchase, TOMS will give a pair of new shoes to a child in need. One for One.“
TOMS.com

Copyediting in the Obama White House, I reviewed the Recovery Through Retrofit Report to Vice President Biden and his Middle-Class Task Force. (Not much more to say about that; it was actually sort of a boring paper… $80 billion dollars, yawn. No, just kidding, investment in renewable energy infrastructure and green jobs is quite exciting.)

And recently – pre-COVID19 evacuation – in rural Zambia as a Peace Corps Volunteer, I happily did so again, on the side, for official government documents. (“Who do you know who winds down a day at the fish ponds by happily editing government documents and training manuals by solar-light in his mud hut, on the side? Me. Now, you know me. Making moonlighting literal.”)

Today, I enjoy the pleasure of continuing to work with inspiring thought-leaders like millennial workplace expert, author, and speaker Adam “Smiley” Poswolsky; and Colin Wright, full-time traveler, prodigious shipper of a cornucopia of tomes and the always-insightful weekly podcast, Let’s Know Things. (If you’re into intelligent podcasts, you won’t regret adding Let’s Know Things to your regular queue. Highly recommended!)
​
(Have a gander at the Testimonials page to see what these nice folks have said about our work together.)
You need another pair of eyes.
Your work deserves nothing less.
​
“Here, use mine.” And lucky you, I actually have 20/10 vision. (Did you see how small that billboard URL was?)
(Yes, 20/10 vision is a real thing; my eyesight is even better than 20/20… though I am colorblind, so… just don’t ask for my fashionista opinion on that #OOTD and we’re good.)
​
For important documents of any length, I’m Adam; hello. 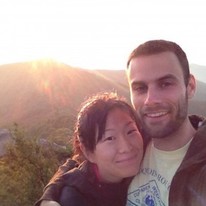 (And that’s Lianne.)
Thanks for reading.

Let’s chat or email hello@AdamGreenberg.com for a free quote.